I am so excited that Teresa Grabs is hosting writing prompts again. This was the prompt for the 2nd of January:

Your challenge today, should you accept it, is to take a trip down memory lane to a time when the west was wild and untamed. Write an old west take on the Bounty Hunter genre and see if you can outsmart the sheriff or catch your outlaw before they steal another horse…or whatever/wherever the prompt takes you.

You may recognise some of the characters from my Annabelle Riley story. Dean Mathers (Annabelle’s ex) and his band Mildew are the outlaws in this story. Burt Jennings, Len Booth and of course Chris Ward, Robin Grainger and Annabelle also feature. This is a Wild West / Bounty Hunter short story – my effort for Teresa’s fabulous writing prompt! 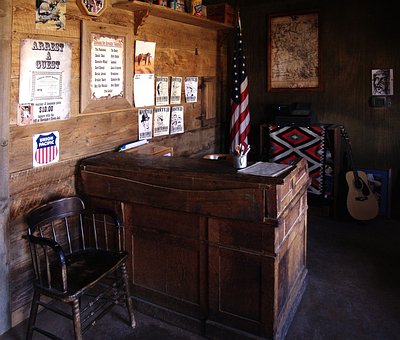 Leonard Booth, the owner of the Blackwood Gin Palace, nodded to Sheriff Albert Jennings as he nailed a mailer to the saloon door. An eerie silence fell upon the townsfolk drinking in the bar that afternoon. Barely audible grumblings were heard as the drinkers related their own losses due to Mad Dog Mathers and his band of outlaws.

The door of the saloon swung open and a tall figure strode over to the bar with the “WANTED” sign crumpled in his hand. He slammed the poster down on the bar top. “What’s your poison?” asked the bartender Leonard Booth.

“Bourbon, hold the rocks,” ordered the stranger. On receiving a glass of Kentucky Bourbon, he knocked it back in one large gulp and let out a gasp. “Word about town is that Mad Dog Mathers held up the county bank and shot the clerk, a Mister George Riley.”

“You say he took off for the Blue Hills.”

“Everyone knows he and his band have a hideout up there near the canyon. He has been hustling cattle through that route these past two years. They say Mad Dog has lookouts posted all the way up the valley. Noone who has gone after him has come back alive.”

“Nobody yet,” growled the stranger, “Mad Dog Mathers is gonna be chicken feed by sundown.” 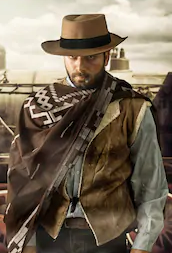 Hoots of laughter sounded around the saloon. “Who shall we say went up to claim the bounty when Sheriff Jennings comes asking about a missing bounty hunter?”

A long whistle was heard as Ward turned on his heel and confidently strode towards the saloon doors. But as he was nearing the doors an uproar was heard outside. The crowded saloon was emptied in moments as one and all sought to discover the cause of the disturbance. The tumultuous roar from the hooves of galloping of horses, as well as the rickety wagon wheels they pulled along, came thundering along the dust road into the town.

“Madre mia, it’s the soldado!” cried the lumberers who had poured out of the bar.

“Where’s the Sheriff?” shouted the man on horseback.

Sheriff Jennings was soon on the scene, “Gracious is that Miss Annabelle?” he exclaimed with astonishment.

A pretty young woman with caramel golden hair was sitting side saddle on the large chestnut horse, clinging to the torso of the handsome soldier who was handling the reins. “Yes Sheriff, it darn tootin is! Lieutenant Grainger has come to claim the reward on the dagnabbit crook who shot my father.”

The crown of onlookers were silent as Sheriff Jennings hesitated, “The reward is only on receipt of Mad Dog Mathers himself into the county jail. Or if he is already dead, you need to supply evidence.” 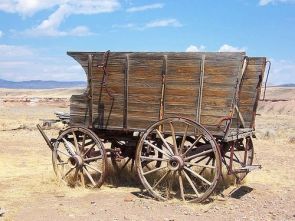 “You can have all the evidence you need Sheriff,” responded Lieutenant Grainger. He slipped Miss Annabelle down onto the ground and dismounted. Unhitching the wagon from the horses, he beckoned to the Sheriff, who followed him around to the trap door of the wagon, “Alive will have to do. I never kill a man before I’ve had breakfast.” He lifted the catch and the door fell open. Gagged and tied up in the back of the wagon was Mad Dog Mathers and his band of ruthless outlaws, who were clearly seething with rage.”

As Lieutenant Grainger and Miss Annabelle strolled arm in arm towards the home where the grief stricken Mrs Riley was consoling herself within, Leonard Booth elbowed Chris Ward, “It looks like someone beat you to it. Shame you missed out on the reward. $1000 and Miss Annabelle’s fluttering eyelashes is quite a prize for a soldier.”

8 thoughts on “WANTED – Dead Or Alive”