Teresa’s writing prompt for today really challenged me. In fact Jack has found it very amusing hearing my ideas. He seemed to think I was aiming for a comedy:

Your challenge today, should you accept it, is to explore the darker side of humanity. Write your take on the horror subgenre of Man-Made Horror and see where it leads…or whatever/wherever the prompt takes you. (Man-made horror usually involves mad scientists, experiments gone wrong, apocalyptic situations, mutated animals, etc.)

Well…it probably is lacking in fear factor. But this is me! I don’t really do scary. But I have had a go. That is why I love Teresa’s prompts. They push me to try new kinds of writing.

After the 2030 United Nations climate change convention in Montreal, the announcement had been made that government grants to any industry or company without a zero carbon footprint would be cut. In addition fines would be imposed and there could be further action, including prosecutions, against any industrial enterprise with a significant carbon footprint.

Industry leaders invested heavily in scientists who had been researching and developing cleaner energies and alternatives to traditional manufacturing methods. It took another ten years before leading nations declared that they were meeting their zero carbon footprint targets they had been working towards for the previous two decades.

It was also reported that there had been a significant reduction in the particles of plastic per litre of sea water analysed. Prominent political figures claimed mankind had reversed the damage to the oceans and that now nature could do it’s course in cleaning itself.

Around the same time, there were a number of mysterious disappearances reported in the media. The population of entire neighbourhoods had vanished. Special security services and crime agencies launched investigations into the reported cases. But their resources were stretched as the phenomenon of vanishing communities increased.

Organic compounds discovered at the scenes of the disappearances  were tested.  The same chemical structures were revealed at all the sites being investigated and traced to laboratories researching clean nuclear energy. There was a total media blackout on the classified reports. The media were fed occasional updates, to the end that there was nothing to be alarmed about and that security services suspected no foul play. 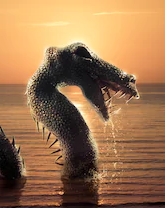 But then a photograph taken in Oregon appeared on social media and went viral. The FBI and Homeland Security tried to dismiss the photograph as a fake and claimed the sensational claims on the internet were complete fantasy. But more and more sightings were reported. The public began to gather in  their hundreds of thousands outside government buildings demanding the truth.

The truth was not pretty at all. Early in 2020, a genetically engineered marine creature had been released into the ocean. The fang toothed razor serpent had a digestive system that could break down plastic. Although it’s release had been classified, the scientists involved in laboratory testing attributed to it the improvement in the pollution levels in the oceans.

What scientists had not predicted was that in addition to the razor serpent’s partiality for plastic, it would also engage in the consumption of toxic nuclear waste that had been discarded off the shorelines of South East Asia. 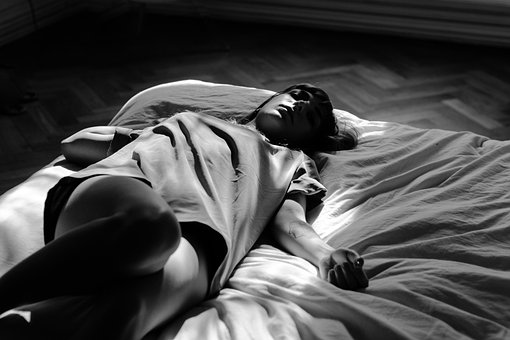 Silently they had slithered into the homes of sleeping residents. The anaconda genes that had been added to their modified DNA structure kicked in, as they went about consuming their new found prey.

It turned out that the public had a lot to be alarmed about afterall. Scientists trying to solve one problem had created a myriad more. They may have achieved a carbon neutral footprint and reduced plastic pollution in the oceans. However, they had now unleashed a man-eating marine creature that had infested the water systems.

Jim Adams, aka Newepicauthor, the creator of A Unique Title For Me, is hosting SONG-LYRIC-SUNDAY and this week he has chosen the theme: LA

Oooh it was close between Kylie and Roxette. But as the Kylie song I thought of gives me a slight headache whenever I hear it, I chose Roxette.

I think I have mentioned in other posts that although I was never excited about Roxette themselves, there are a handful of their tracks that I loved and I still love. It’s weird because I don’t know anything about Roxette, but I counted five of their tracks on my YouTube top 100 playlist.

Which must mean that someone in Roxette knew what they were doing. Tracks that survived their decade and end up acquiring a certain iconicity in their own right. This is one of their memorable tracks. Right slap bang in the middle is the “la la la la la” that makes it my choice for today’s SONG-LYRIC-SUNDAY.

Written By: Per Gessle

The first time I heard the term “la” I was entranced. It was within a song that completely captivated me at the tender age of five, and has continued to enchant me ever since. On New Year’s Day, my gorgeous Jack humoured me by hosting me and some friends of ours for the BBC showing of “The Sound Of Music”. How I love him!

Jim Adams, aka Newepicauthor, the creator of A Unique Title For Me, is hosting SONG-LYRIC-SUNDAY and this week he has chosen the theme: LA. I could not really go without mentioning how I first discovered the “la” – could I?

Is it embarrassing that at a moment’s notice I could sing the entire score of “The Sound Of Music”? As can most of my family and a core group of my friends I grew up with!

This particular track has wonderful scenes where they mix up the “Do-Re-Mi” theme and in delightful harmony an eruption of joyful singing cascades around the streets of Saltsburg. I know every word off by heart. 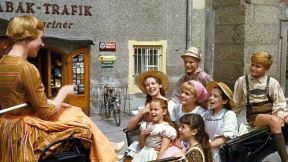 Even now, the thought of that gorgeous film makes happiness ripple through me! They just do not make films like they used to. But I don’t mind that. It is an utter pleasure to sit down and anticipate the opening bars from one of the most gorgeous films ever produced. (Although, I will admit, we do not stay on the sofa for long, we jump to our feet and sing and dance whenever impelled.)

Hollywood, although I despise you in so many ways, I thank you from the bottom of my heart for “The Sound Of Music”.

DO – a deer, a female deer
RE – a drop of golden sun
MI – a name, I call myself
FA – a long long way to run
SO – a needle pulling thread
LA – a note to follow SO
TI – a drink with jam and bread
That will bring us back to DO

Do, a deer, a female dear
RE, a drop of golden sun
MI, a name, I call myself
FA, a long long way to run
SO, a needle pulling thread
LA, a note to follow SO
TI, a drink with jam and bread
That would bring us back to DO…