Teresa is taking me into entirely new genres with her fabulous writing prompts. Although my short stories are not great, I am having a great time giving them a try, and that is all that matters:

Your challenge today, should you accept it, is to explore the darker side of humanity. Write your take on the mystery subgenre of Culinary Mystery and see where it leads…or whatever/wherever the prompt takes you. (Culinary Mystery: A subgenre in which a professional chef is involved, usually as the protagonist. Murder and/or other elements of crime are often combined with food and recipes.) 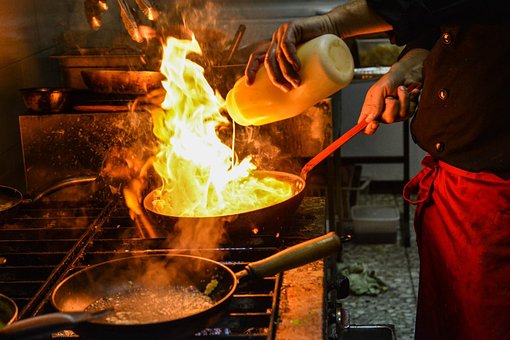 The Cushi Curry takeaway restaurant had a questionable policy when it came to how they dealt with critical reviews posted on food ordering websites. Marvin, the manager, would contact the critical customer and apologise for the bad service they had received. He would then offer to deliver a free banquet if the customer would agree to remove the negative comment.

Most customers were happy to oblige. It seemed that deleting their criticism in return for a free Cushi Curry banquet was a popular response. However, there was an occasional difficult customer who refused to take down their critique. Marvin had a different approach for those stubborn customers.

“Special order for 84 Nugent Street,” Marvin stated to Gustav, the chef on duty that night.

“Very special order! Let me know when you have finished so that I can go and empty the bins across the road.” Marvin left the kitchen as Gustav began to roar with laughter.

A few days later the newspapers reported the deaths of a family who lived in a semi-detached in Nugent Street.

CCTV footage showed an Uber-eats delivery man on a moped pulling up outside the house. His face could not be made out as he walked to the door wearing a motorcycle helmet. The pictures clearly showed a bag being handed over to the young man who answered the door. When an expert focused in on the bag and enhanced the quality of the image, the label on the bag clearly stated “The Village Tandoori” with it’s tiger motif could be made out.

The Village Tandoori was immediately closed down pending an investigation by a forensic team. Sure enough, in the bins waiting for collection at the back of the building, a small container with traces of cyanide was discovered. The manager and employees of The Village Tandoori were all questioned by the police.

While The Village Tandoori was closed, orders increased at The Cushi Curry. When residents of the town looked online to check out the reviews, the vast majority of comments were positive. Business was booming for Marvin and his team.

The manager of The Cushi Curry, Marvin, continued his same policy regarding negative reviews, with most critical customers being willing to remove their comment in exchange for a free banquet. But then Phil Davey from 37 Kendrick Court refused point blank to alter his review.

All day I have been thinking of a special someone who is currently “OUT OF OFFICE”. I won’t have any contact with them for a month. 😦 It will be hard to endure. Very hard.

On top of that I start to become insane with worry. I don’t worry about me. But I do worry about people I love. The thought of someone so special, so close to my heart being off grid for a whole month is hard. My mind is racing with all the possibilities of hazards and dangers that might befall my beloved.

So, I am calling out to all Costa Ricans to ask…if you come across an absolutely gorgeous man, with beautiful eyes, really stunning eyes, (and a very cute behind) and who speaks in such a charming and magnetic manner – please please please look after him. Keep him safe. Don’t let anything go wrong. He is very precious to me. So please make sure he has a great time out there in Costa Rica.