Since the end of May/beginning of June when social distancing relaxed to the point we were allowed to have outdoor social gatherings with a limited number of people (which to me spelt PICNICS) I have had a few. Picnics that is! How awesome to have lots of chance to make picnic creations that could be used for THE GREAT BLOGGERS’ BAKE-OFF 2020 SUMMER PICNIC!!!

But to me…of all my picnic creations, this is the pièce de résistance. It is a Rainbow Picnic Pie that I made back in May for the first picnic I had with friends since the social distancing restrictions came into place in March. The photograph directly below is not my pie. This is what I was aiming for. You will have to scroll down to the bottom to see how my pie turned out.

I followed the recipe below from the BBC Good Food website, although I toll a couple of liberties.

So to start with, here are the ingredients I used (….oh I forgot to add you need a little flour for dusting when you roll the pastry)

The butternut squash has to be sliced….I sliced all my vegetables so they were roughly the same thickness…no more than half a centimeter.

I then drizzled the slices of butternut squash in 1 tbsp oil and some seasoning and roasted them for 20 mins until they were softened.

Then the potatoes were peeled and I sliced them to half centimeter slices and boiled them for eight minutes.

Then the butternut squash, onion and potatoes need to cool before they can be used to fill the pie.

Now….I didn’t take a photograph, but it is important to line the baking tin (I used a 20x30cm deep pie tin) with at least two layers of baking parchment/greaseproof paper. It will be so much easier to remove if you do this. If you forget to do this…well…just don’t forget!!!

So….now we come to the pastry section. I rolled out the two blocks of puff pastry into one large rectangle. The pastry should  not be too thin. Aim for around the thickness of a pound coin. Drape it into the pie tin leaving an overhang of pastry over the rim.

Then the rainbow filling process. I filled the pies pastry with the following layers:

I completely to forgot to season each layer, which the recipe says to do so. I think I was distracted by taking photographs. The pie still tasted great but I gave it a twist of salt and pepper over the top.

Then I took those ten eggs and beat them up before pouring them slowly over the vegetable layers. The egg manages to find it’s way through all the gaps. I left a tiny bit of egg to use on the pastry.

I also used some of the egg to brush the overhanging pastry.

Then I unrolled the sheet of puff pastry to create a lid for the pie. I pinched the edged together and with a sharp knife I removed the excess pastry.

I used the remaining egg to brush the pastry lid and sprinkled with sesame seeds.

Then the pie went into the oven at 180C/160C fan/gas 4 and it baked for an entire one hour and twenty minutes (while I did all the washing up, sipped a Martini and lemonade and watched an episode of Pride & Prejudice).

After one hour and twenty minutes, this beauty came out of the oven:

Then I had to wait anxiously for the pie to cool before I could remove it from the tin and slice into it.

When I did slice into it, I had the joy of seeing exactly what I hoped….a rainbow!!!

I made it just on time for the social distancing rules to slightly ease. I chilled the pie and it was perfect for a Sunday picnic with a few friends, which was the first social event I had enjoyed in almost three months!

That pie was demolished very quickly. Everyone thought it was fabulous! I hope you did too!!!

Despite everything that is causing anxiety, it has been an incredible spring. I have had a taste of it each morning and each evening when I am going to work and walking home. I walked down my road the other day listening to birds and admiring the colours of flowers and the scent from the wisteria. The trees are bulging with heavy green foliage. 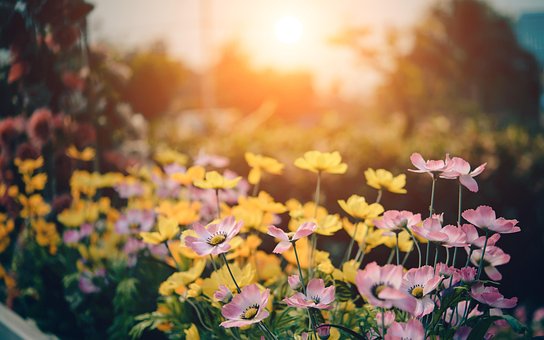 It has been glorious. My family are still staying at home. We are helping each other, supporting one another – physically, emotionally, financially and there is no shortage of home entertainment videos.

My boss likes to make sure we end a shift at work with a song and a dance. It is great fun. We need that lift after a hard day at work. I am working again today. I am looking forward to coming home and resting after a busy week at work. Sleep is so delicious of late. I am still sleeping nine or ten hours every night, which is incredible for my body and my brain.

Although I have spent more time than usual on my own of late, I keep on thinking of the incredible people I have met on my voyage through life, people who inspired me and encouraged me to make brave decisions. I spurned the world’s economic system to work full time as an international volunteer. People laughed and asked how I could live without any wages. I lived. I truly lived. I felt rich.

I have been thinking about the Liberian refugees we met in Ghana seventeen years ago. I have been thinking of my cousins who were in Rwanda working on a project with Hutu and Tutsi volunteers when violence engulfed the region. I have been thinking of Katrina, who I cared for until she took her last breaths – she was one of the most beautifully hearted people I have ever known. I am so grateful that my life has been so rich with people who have taught me that even in the most terrifying of situations, unexpected acts of love and self-sacrifice arise.

Even in storms there are people who help you see rainbows everywhere you look. 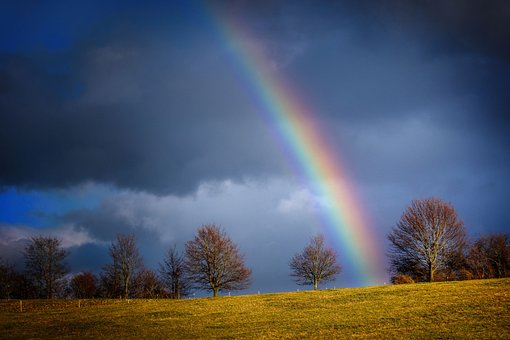 I don’t know what has got into me…I am feeling overly romantic – must be missing Goldfinch way too much!  I very rarely attempt poetry because I am pathetic at it.  But as soon as I saw this picture prompt from

The Haunted Wordsmith, it started to play on my mind…and here I have something that could loosely be described as a poem because there are rhyming elements and it is all mushy and vague.

Sorry to all true poets who will surely be horrified by my definition of poetry.  Here is my offering in response to Worth A Thousand Words #2.

I’m lost in his gaze

Has me in a daze

I am looking deep into his eyes

And all I see is rainbow fields forever

Has me quite spell-bound

I am listening to his voice

And all I hear is rainbow fields forever

I breathe in his scent

I am craving his aroma

And all I smell is rainbow fields forever

Wrapped in him I stand

I cling to my loved one

And all I feel is rainbow fields forever

His lips meet my own

I’ve longed for his kiss

Leaves me in sheer bliss

His embraces make me breathless

And all I taste is rainbow fields forever