These past few weeks, there has been a lot more fog than I remember for a long time. Freezing fog. I have arrived at work shivery and soaking wet.

I know the way to work like the back of my hand. It is interesting to me, because when it is foggy, I have only been able to see around three or four metres ahead of me. Then there is a thick white grey cloud that obscures everything ahead. But I don’t worry, because I know the way. I know the route. I have been here before, many times. I am not afraid.

When you sense a fog descending in your life, don’t despair. You can do this. Keep doing what you know you need to do, one step at a time. I know from my own experience that it can be frightening – to be stuck in a life fog. To not see the way out, to not see the route ahead can be scary. But take the few steps right in front of you.

The fog will lift.

Soon the choice that all humans will have to make will be as clear as daylight.

Who is qualified to rule mankind?

As soon as I saw Fandango’s picture prompt in this week’s FANDANGO’S FLASH FICTION CHALLENGE, I thought to myself, “That looks like a pea-souper”. What is a pea-souper? The link below takes you to the Wikipedia explanation:

Have you ever been in a pea-souper?

When you feel your life has become a pea-souper…and you are lost in fog so thick that you can barely see your foot in front of you, without knowing how you became so lost and not knowing how to get out of this pickle – do not despair.

Look up – even in a thick fog you can see the stars.  Take the next step in front of you. Then take another small step. Someone can see exactly where you are, how you became lost in this fog, where you have been wandering and what you need to do to get out of the fog.

I painstakingly produced this post using the block editor and it was an interesting learning curve for me…to say the least. Is that a nice way of putting it?

No electronic devices were harmed in the production of this post…despite the frustration of the user, who was trying to make sense of the block editor.

I read so many posts about the challenges others have had, either on a short term basis, or, in some cases, for an entire life-time, with their emotional or mental health. I truly appreciate the honesty and courage of many posts.

Well…I have to say it sometimes makes me very tearful hearing or reading about the enormous challenges others have faced.  I read a post the other day which had me sobbing about a blogger who had lost her beloved husband…ay ay ay! But there are many others who refer to crushing blows to their emotional health.

Sometimes, I wish I could run around giving out hugs and boxing up rays of sunshine, rainbows, cupcakes, daisies and fluffy bunnies or literally whatever it would take to sooth a heart crushed with pain or warm a spirit frozen by despair.

But for most, there is no easy answer…no quick fix solution.

I still think that for each one of us…it is a mighty good thing to do something, even if it is a very little something.  I remember a very annoying goofy twenty two year old lad who was nowhere near the top of my list of wanted visitors after I left hospital over three years ago. In fact at one stage I felt edgy around any men. He did something…a very little something. Three little somethings actually. One was a daisy, one solitary daisy that he had picked for me because he knew I like them, one was a packet of peanut M&Ms because he thought I would like them, and the other was a recording on his mobile phone of his brother singing a crooner in the shower, which was frankly the little something that clinched it for me and made me smile and then laugh.

There is no quick fix solution, but I still think it a mighty good thing to do something, whether it is goofy or seems insignificant, to show someone you are worried about, that you wish there was something you could give to take away their pain. But more than anything, to show you care, you might not truly understand, but you care.

It’s clear that the chap below cared and did something for someone he cared about:

I have had one major challenge to deal with myself…as I have referred to in some posts. I feel a million times better now I have had a chance to distance myself from that situation for some time.  The pain is there but I am winning! 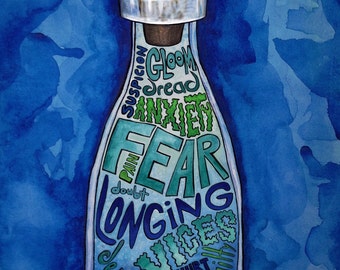 I made a dreadful mistake, I didn’t know how harmful it was to bottle up all the hurt that situation was causing me and try to deal with it on my own. In my case, it was the drip drip effect of constant taunting for over two years and then the animosity of one person, that intensified during the year before I was the victim of a crime. It wore me down, to the point I made at least one unwise decision and put myself in danger.

I have said it before and I will say it again, what happened to me in the park has not really been so hard to get over. It’s there, but it is in a box with the lid firmly sealed tight shut and I keep that box on the very top shelf.  I do feel as if I have conquered that threat to my peace of mind and joyful disposition.  The other challenge…it has not been so easy.

I am very grateful for all of the little tiny somethings that others did.  Nobody could undo what had happened to me. At the time there was certainly no way I was going to just wake up and forget everything that was hurting and “get over it” with the click of my fingers. I was not always able to cope with visitors or anything that excited or tired me too much. But all those little somethings from others mean so much to me!