It was not only in the accommodation I was living in that I was having challenges that came from men who did not seem to realize how uncomfortable they made me. I published this post a while ago, but it describes an incident that occurred during the time I was in my first “tied-accommodation” post and facing almost daily harassment:

I had a little incident with a man today.  I was in a bit of a pickle and I panicked.  Now, I am wondering if I over-reacted, and I feel bad.  You can judge me…it’s alright.  I am aware that I did not handle the situation perfectly.

I had just jumped off the tube when a stranger brushed against me and then immediately apologized.  I replied, “No problem”.  As we came down the steps he was looking at me and smiling.  When we reached the end of the steps, he put his arm forward and touched my arm and said “this way”.  I was just a tiny bit freaked out.  He would not know why I have reason to react awkwardly to a stranger touching me.  I looked at him and clearly told him “no thanks”.  I very deliberately walked the opposite way straight into the newsagents within the station, WHSmith, even though I didn’t need to buy anything.

Once I was in WHSmith, I looked at a few items I sometimes pick up on my travels.  I decided there was no point buying anything right there and hoped now I could just carry on with my journey.  As I was leaving the shop, he was standing there in front of me.  I may have been imagining it, but he seemed to be watching me.  He smiled at me and said “Hi”.  I said “Hi” and walked out with a very quick pace.  He had not done anything terribly invasive, but for some reason, he had triggered my panic buttons.

I walked through the barriers and then did a U-turn to head up to the busiest part of the street even though that is not where I was headed.  I just needed to know there were other people around.  I had panic running up and down my spine telling me not to go anywhere isolated.  I was walking so quickly that my silly little shoes kept sliding off my feet.  He ran up beside me and he asked me if he could have some shelter under my umbrella.  I gave him a look which I thought said “not on your nelly!” which he did not seem to interpret correctly.  (Now I was starting to feel trapped).  He asked me to walk with him towards the bus station.  I told him I was going the opposite way.  He said that was fine, but he carried on walking with me.

He told me he is from Portugal and asked me if I had ever been and would I like to go.  (I have many Portuguese friends and know a few Portuguese expressions but did not tell him anything.  Even my sister Mandy has learnt enough Portuguese to have conversations about art and order a few pastéis de nata when we are in town together.  We even have Portuguese connections through marriage.  Our Helen married a very handsome Portuguese man and then when his best friend came over from Portugal for the wedding he met one of my best friends Laura…and it was happily ever after for them too.)  I was not liking the attention from a complete stranger so I did not respond to his questions.

He decided to ask me where I was from.  I said Liverpool – that is where I am

from, although I have not lived there for over ten years.  He then put one of his hands on my umbrella very firmly.  He asked my name.  I was starting to feel very threatened.  His grip on the handle of my umbrella was so strong.  (Maybe he wanted the umbrella and was not really interested in me.)

I told him that I knew he was just being friendly, but that I was not comfortable sharing any more information about myself, because he was a complete stranger.  When he objected, I just confirmed it was a no saying, “I don’t mean to be rude and please don’t take it personally, but this is the world we live in today”.  He told me that although we were strangers he would like to get to know me.  He asked if he could take me for something to drink or eat.  I cried “no thank you, I am headed to meet friends”.

He asked me if I was going shopping.  I was starting to get a bit frazzled.  He offered to hold my umbrella for us so I could rest my arm.  Again, I declined, “thank you but I am going inside now anyway.”  My umbrella has a button in the handle that pulls it in, so I clicked it.  He said he would like to talk to me until I met my friends and maybe we could go for a drink another time.  He then asked me my name again.  I felt like crying, “I am sorry, but I have told you I don’t feel comfortable simply because you are a stranger.”

I saw two security guards in big hi-vis yellow coats and ran towards them.  I didn’t say anything to them.  I just stood beside them until the man who had been walking with me backed off.

I know I have a very good reason to be nervous around men I don’t know…but do you think I was rude???  Do you think I over-reacted?

There is not much I can do about it now…I am just feeling a bit unkind.  Yet at the time I really wanted to get away from him and he did not seem to pick up on the vibes I was sending out.  I thought I was making it very clear that it was a no!  I was saying no and he was not listening.  He just made me feel more and more uncomfortable.

I know some women would not have minded, they perhaps would not have felt as threatened as I did.  It’s just after that night in the park, I have panic buttons I did not have before.  He triggered them all.  I ended up feeling like a hedgehog or porcupine with all my sharp needles bristling!  It is funny because my lovely Goldfinch was a complete stranger when I met him, but he did not make me feel uncomfortable.  He certainly did not trigger any of my panic buttons.  Aaaah, Goldfinch…I forgot I was going to tell you about the lovely day we had together on Wednesday.

I am not going to let myself brew on this one.  Perhaps the Portuguese stranger was a lovely man.  I did not feel comfortable though.  For whatever reason, I had every right to say “No thank you!”, just as I did with my workmate in “Icky Sticky”. 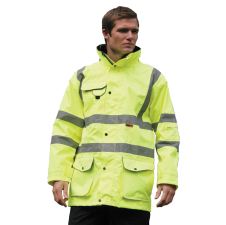 What a shame this is the world we live in.  I really don’t like feeling as if I have been rude to someone, but in this world, there are times when you have to be on the defence, cautious and you have to flee to a point of safety.  When you are in a pickle that makes you panic…just run to safety.  That is one of the reasons hi-vis jackets were created…for moments when a stranger crosses the line and we turn into damsels in distress.

(Thanks hi-vis jacket designers…these are my go-to whenever I have a panic moment!)

53 thoughts on “Panic After A Pickle With A Portuguese Man”