I know that all day you have been wondering, “How is Caramel getting on as she ventures forward onto the streets of London with a big NHS sign and leaflets? (Probably not!) Well, you may be as surprised as I was at the report I have for you…

Yeah…I bet you were not expecting that! I am going to tell you all about Caramel’s encounter with the great British public, as she interrupted their Saturday meanderings to tell them about NHS services.

I was prepared with a large sign attached to a clipboard. I held it (a bit like a shield) so that people could see the “ASK ME ABOUT NHS SERVICES” invitation. On the inside of the clipboard was a folder (I found it at home) with two separate pockets. I put around 100 Flu Vaccine leaflets in one side and 100 NHS online services leaflets in the other side. I put my face mask on and some gloves (I felt it would be better to wear gloves) and off I went.

Because I started pretty early this morning, there were not many people around. So…I visited every local business near to where I was expecting it to be busy later, and asked if I could speak to the manager. I explained that I would be in the area speaking to local people about how they can access NHS services, but was visiting local businesses with staff who work in very public roles first of all. The reception was amazing. Lots of interest and nothing except loveliness from all the staff I spoke to. Perhaps that was the highlight of the day for me. I also spoke to people inside the indoor shopping precinct who were just hanging around waiting for shops to open. Again…lovely people, interested to hear what I had to say and very appreciative.

Then I ventured into the busiest part of the High Street, a major crossroads for this part of London. I was near a Train/Tube station which happens to be next to a row of bus stop with some very busy South London routes. Lots of people. I spoke to a couple of people….both worked for the NHS.

And then….came my first challenge! A lady approached me with a bee in the bonnet, an axe to grind. She seemed to think I was the Devil. She happened to be holding some leaflets of her own and in the possession of a sign rather bigger than mine. Her advertising material seemed to be in connection with a United nations or World Health Organisation Charter. I glanced at what she was holding, but was distracted by her aggression towards me. I was baffled at first, her purpose was essentially to tell me I was immoral. But I asked her some polite questions to understand her objection. She cares passionately about the NHS, however her objection seemed to be over the government deciding to offer out private contracts for some services (like the flu vaccine).

Anyway, I was very respectful to her. I explained to her what I was doing, and that I was not trying to tell people which service provider they should go to, I was just presenting the options they have this year. I think I appeased her because I was so polite to her. But I also pointed out that I personally do not make the political decisions which influence how the NHS operates. I simply enjoy my role in providing a helpful service to people. I also was able to explain to her that I personally have spent most of my life working for charities on an unpaid basis and I am not commercially motivated. We parted in peace and wished each other well.

I moved a few metres away and carried on. During the next few hours I spoke to many peoples. Families, older people who will qualify for free vaccinations, younger people, couples, people of at least five different language groups (I knew how to greet them in their language, which I think was appreciated) and I had a very nice surprise. One woman I spoke to told me that she designed the leaflets I was giving out. She is a graphic designer and she was the person who actually put those leaflets together. Isn’t that bizarre!

Did I have any negative experiences? Well, although there were lots of people interested, there were also lots who rushed past, indicating they were busy. That was not really a negative. That is what I expected. I was amazed at how many people did want to listen and ask questions. One gentleman said to me “The NHS ruined my life” (and he was not being in any way aggressive to me, I was obviously just picking the wrong subject to speak to him about), so I just graciously said that I was presuming he had been through a very negative experience and I was sorry about that. I wished him a very pleasant weekend.

But on the whole, I had a great time. It was a joy to chat with so many lovely people. I think I spoke to around 30 different people working in local businesses, and at least 50 people outside in the street. I went back to work with such a buzz! I think I had forgotten how wonderful it is just to have time for a chat and to show interest in people.

My thoughts in conclusion…

…if you have to go onto the High Street to speak to strangers, it might seem intimidating. You ought to be wearing a facemask (and perhaps gloves) and keeping a distance from people. Make sure you are mentally prepared with a brief clear explanation of why you are there. Having something visual to identify you is a very good idea. Never start by asking them if they have a few minutes spare (what a silly question to ask!) You have to be a little resilient for the people who just want to rush past you and pretend they had not noticed you (even though they clearly changed their trajectory when they saw you). Do not take any of that personally.

Whether you are selling double glazing, asking people to switch their utilities provider, campaigning for equal opportunities or world peace, fundraising for a charity, telling them how God’s Kingdom will fix all the damage done by human governments and give them the opportunity to live forever on a paradise earth, or showing people the various routes of accessing NHS services…you will make an impression on people just by being a presence. Whether they spoke to you or not, many of them noticed you. Do not take anything personally. They are not rejecting you, they are just reluctant to be pressured into anything, and likely occupied with another reason that brought them to the High Street. Even if lots of people show interest in whatever you are offering, there will also be opposers. Take it on the chin with a grin, be gracious and respectful, let them leave in peace and retain your peace of mind.

Keep your focus. You are there for a reason. For some of you, it is a paid job and will allow you to pay your rent at the end of the month, whereas for others it’s unpaid, motivated by a passionate belief that you have a message others can benefit from. (I had it both ways on this occasion.) Remember that even if you receive ninety-nine “I’m busy“s, or “I’m not interested“s or “Go to hell!“s…the joy you feel when one person says, “Thank you for what you are doing, that is very helpful,” will make you forget every negative.

It’s nice to have a friendly chat and it will buoy you up and restore your enthusiasm, however, try to have numerous brief conversations with lots of people, rather than becoming the A-Z of medical ailments (or your field) to one or two people. Speak up, speak clearly (don’t shout) and give a brief clear explanation of why you are there. Dress smartly and be friendly, but respect social distancing measures. Do not pressure people, but have visual aids, including leaflets, showing where they can find out more information. Keep smiling! Even though you are wearing a face mask, people can tell if you want to be there or not.

My final conclusion: THERE IS NOTHING, NOTHING, QUITE LIKE HUMAN CONTACT! Now I understand why I was asked to go out onto the streets and make contact with people to help them access NHS services. It was good for me! It was one of the most rewarding days I have had at work for a long time, and I came away with such kind words, genuine expressions of thanks for our hard work and beautiful smiles from lovely lovely people. I think I was the one who benefited most from today. I hope it will have helped some people in this area to know where they can obtain NHS services and the quickest routes to access the services they need.

The book I have chosen to review in this week’s CARMAEL’S CORNER is the perfect solution for feeling blue about all the silliness in the world at large. I bought a book written by Martin Strike, who you may know as The Newbury Short Story Teller. I love Martin’s very humorous stories, which often show a farcical side to people and life. He complied a fantastic collection of his short stories and published them in the sensational “Preposterous Tales From The Newbury Short Story Teller”.

I used to live in Newbury Town Centre, and then later I moved to a beautiful estate a few miles from Newbury. So for me, it is easy to conjure up images when Martin references locations in the Newbury area. I found it a very happy reminder of a place I came to love.

But even if you don’t know Newbury I heartily recommend this book to you. Why? Because we all need some laughs! Martin’s writing is packed with humour. Every story from start to finish will bring smiles to your face. The comic characters, descriptions and conversations he employs can’t fail to cheer you up. 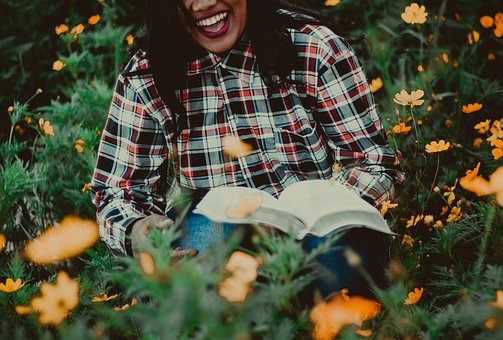 Of all the books I have bought from WordPress readers I have to say, this was the one that left me in the best spirits. His compilation of light hearted and very amusing tales, which highlight some of the absurdities of human behaviour (and it’s not only Newbury where you will find oddballs) are a terrific read.

If you would like a treat to pick up your mood, I definitely would recommend Martin’s “Preposterous Tales From The Newbury Short Story Teller”, because it is great fun and full of great storytelling.

You can find out what Caramel has been reading in her very own little reading corner, as she published book reviews of books written by WordPress bloggers each Saturday.

If you have any recommendations (books written by WordPress bloggers), please leave a message in the comments below.