I found Teresa’s writing prompt for today intriguing. It gave me a little idea to develop a post I started last year and has been sitting in my drafts folder waiting for me to give it attention.

For today’s prompt, use the image above of a pottery shard and tell it’s story. Where was it made? Who made it? What was it used for? How or Why did it break? How you use the pottery shard is up to you. Let your mind wander and see where it leads.

I am used to visiting museums and historic sites. The post I wanted to work on was about some artifacts on display when I visited The Roman Baths in the beautiful city of Bath.

As Professor O’Keeffe gently brushed away the dusty sand that held the pottery shard in place, her eyes focused on the small marks on the inside. As the earth that had hidden the shard for centuries finally gave way, she was finally able to gradually release the artifact and transfer it to the collection tray.

Hours later, one of her research team called Professor O’Keeffe to examine the reverse side of the shard.

Curtis declared to Professor O’Keeffe, “It’s another prayer for vengeance. This one is horrible!”

Professor O’Keeffe and archaeology team were working on previously undisturbed parts of the world famous Roman Baths which were painstakingly being excavated before they were due to be opened up for public exhibition.

Amongst the fascinating discoveries made were the many shards of pottery and clay that contained prayers that an enemy be cursed. There were already numerous such requests for the gods to exercise vengeance on display in the Roman Baths Museum. One worshipper named Docimedis, who had attended the temple at the site back in Roman times, had complained about the theft of his pair of gloves. He had wished for the thief to lose his mind and his eyes.

But archaeologists had unearthed ever more shards inscribed with pleas for revenge.

“What does this one say?” asked Professor O’Keeffe.

Curtis screwed his eyes as he focused in on the carvings in the pottery shard, “It seems to be referring to one of the plunge pools here at the Roman Baths. Whoever wanted revenge asks that the water temperature become so hot that the man who stole his wife be boiled to death.”

Professor O’Keeffe pulled her face, “That’s really macabre, isn’t it? It’s no wonder that the worship here disappeared long ago. Imagine all these worshippers coming along with hearts full of hatred, praying that their enemies be cursed in all sorts of sadistic manners. You can’t imagine this was having a healthy effect on people.”

Curtis pondered over the many shades of vengeance he had seen inscribed in clay. “I guess seeking revenge is one of the more sinister aspects of human thought. People can feel so justified and righteous in their desire to see their enemy suffer that they walk straight into a place of worship and permanently record their rage and the desire for vengeance.” 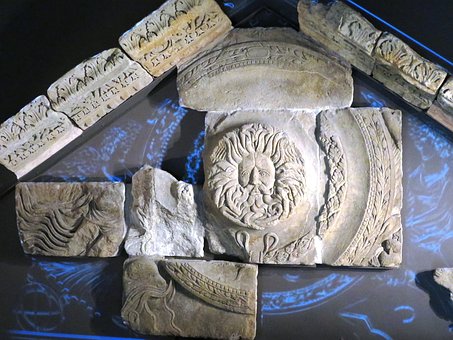 Professor O’Keefe nodded, “That’s why we’re here Curtis. In exhibiting lessons from the past, we hope that mankind will not repeat the same mistakes that humans have made throughout history. The record of humans seeking revenge is a brutal one, a quest that has never brought about true justice. Just more and more suffering and bloodshed. Some of the bloodiest wars were fought by those who believed a god was on their side. “