Teresa’s challenge for today is yet another genre I am not used to. Well all these different genres certainly make a change from writing about my lovely Jack, don’t they!

Your challenge today, should you accept it, is to take to the skies and explore. Write your take on the science fiction subgenre of Aliens and see where it leads…or whatever/wherever the prompt takes you.

I have so little imagination when it comes to “aliens” themselves, but I thought of a little story all the same. 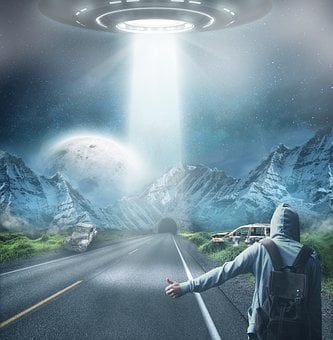 “Where’s Stevie tonight? I was sure he would be here.”

“Stevie! Oh goodness, Stevie has lost the plot. He said he has gone to meet “the aliens” when they return,” laughed Judith.

Richard raised a cynical eyebrow, “Oh no, he’s not still going on about that nonsense is he? Somebody’s been watching too much sci-fi!”

“He is obsessed with his alien stories. He has been saying for weeks that a ship from his home planet on the other side of the galaxy, is on the way here to take him back home.”

“He’s getting worse Judith. When will he grow up?”

At that very moment while Richard and Judith were talking, Stevie was next to the B412 just before the Enbuckle Tunnel. As it slowly descended, the ship decloaked once it was within a hundred feet of the road surface. Once the ship had landed and the door opened, a landing crew of three officers disembarked to greet Stevie.

Stevie knelt and bowed his head, before the senior officer, who wore several military awards hung on a heavy bar that was tacked to either side of his enormous collar bone, “NuqneH yuQ tera’.”

“Mut lutlh” was the reply of the Commander. 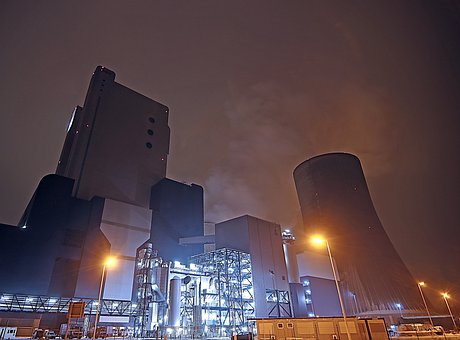 The next day media organisations reported on the mysterious explosion at the Enbuckle nuclear plant. The whole area was evacuated due to the hazardous radiation readings.

Families were unable to return to their properties for the next three months. During those three months there was so much upheaval in the Enbuckle community it was hard to keep in touch with neighbours and colleagues.

“I wonder where Stevie has been staying?” pondered Judith.

Richard responded, “I always presumed he must have some family or friends out of town. Even though he never spoke about them.”

“He only ever spoke about the alien species he claimed to be from. He’s never mentioned any real family.”

“Ha, ha. Hey Judith, maybe he has gone home to the planet he and the other aliens are from!”

“Oh Richard, you are hilarious! Well, wherever he is now, I hope his loved ones are helping him get that silly alien nonsense out of his head. I was starting to worry that he was going to end up with the whole town thinking he was crazy.”

Stevie knelt and bowed his head, before the senior officer, who wore several military awards hung on a heavy bar that was tacked to either side of his enormous collar bone, “Welcome to Planet Earth’.”

“This species is primitive” was the reply of the Commander.

After rising onto his feet again, Stevie agreed, “Yes they are. There is a nuclear power plant nearby. There is enough uranium there to refuel the ship for the journey home.”

8 thoughts on “Mut lutlh (This Species Is Primitive)”