At the end of the previous part of Annabelle’s story, Chris was just about to descend the stairs when he realized that Robin and a tearful Annabelle were sat on a step halfway down the stairs.

Robin’s voice was the first Chris heard, “Belle, don’t be like that.”

Chris could just about make out the sounds of Annabelle sniffling, “You didn’t even like the song.”

“Robin, please don’t make out this is my fault. I have tried really hard.”

Chris saw Robin put his arms further around Annabelle’s waist and rest his head against hers. “I know you have. It is very touching that you wrote a song about us. I told you it was special. I didn’t want how I have been feeling to ruin Christmas Belle. It’s just something that is not going to go away.”

Annabelle paused, “But you knew Robin, Before we married, you knew how I felt.”

“I did Annabelle. I know that. I suppose, as time passes, my feelings are becoming stronger. I don’t want to have this discussion here. But I think it is only fair that we talk about this when we are home. When you are feeling up to it.”

Annabelle gazed at Robin, “It doesn’t seem fair Robin. I love you so much. It’s not fair for this to ruin everything between us.”

“Hey, Belle, don’t say things like that. You are being extreme. It’s not going to ruin everything between us. I don’t want you to think about it anymore. When we are on our own back home, we will talk about it calmly. Don’t be so dramatic.”

Annabelle raised her arms around Robin murmured into his face, “I don’t want to lose you.”

“You’re not going to lose me, “Robin laughed, “Tell me about what you have been doing with Natalia’s artwork. My parents seem to know all about it. Why haven’t you told me? Have you been forwarding pictures of her work to Dean?”

Annabelle nodded. While still wiping her eyes, she confirmed, “Dean really liked the pictures from Natalia’s exhibition last year. When I first sent them last summer, he said he liked a couple and would think about buying something. But I never heard another word until I sent the lyrics for your song.”

“Go on, I am interested Belle,” Robin encouraged her.

“Well, the song is about love and pain. So is Natalia’s art. You’ve seen her pictures. They show hope and love in bleak circumstances. Dean said he thought it would be great to use her art in the video the band and Lola will be in. It’s going to be in all the promotional material too.”

Robin wrapped his arms tightly around Annabelle, “Dad’s right, this is a great opportunity for her. Millions of Mildew fans are going to see her work. That exposure is tremendous.” 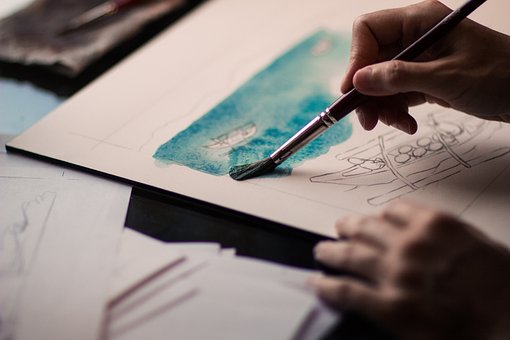 Annabelle smiled, “Dean said that so far Natalia has been great to work with. But everything has been over video calls and sending electronic files. When they have told her about some of the themes for songs on the album they are working on, she has sent over more new artwork to them. They love it.”

“So this trip Natalia is going on to LA, is she going to go and meet Dean and the band?” there was a tone of concern in Robin’s voice.

“She is going out to Los Angeles to work more closely with developing art and graphics for the album. I don’t think she will see much of the band, but I am sure she will meet them. Jim will have arranged for her to work with graphic artists and technicians. She said she is really looking forward to the experience because she has never worked on a project like this.”

“Belle that is such a lovely lovely thing you have done for her. You must warn her about what it can be like out there.”

“Jim will look after her Robin. He knows there is a personal connection. I am sure he will make sure everything goes well. Jim is very happy with me. Half of their new album has songs I wrote the lyrics to. Dean has been very enthusiastic about turning them into songs. Jim said it is some of Dean’s best composing. He is sure it will be a huge hit.”

“I know I know. He’s been very supportive though Robin.”

“I acknowledge that. It’s the words that you wrote that are special to me though. Your song is very touching and whatever anyone else thinks of it, I care about the way you feel. I always have Belle. You know that, don’t you?”

Annabelle raised her head and looked into her husband’s eyes, “It’s hard for me to imagine going through that again. I have zero desire to be a mother. But Robin, I don’t want to destroy your hopes. I don’t want to hurt you. I don’t want you to ever resent marrying me.”

Chris waited until Robin and Annabelle had finished their conversation and decided to go back into the sitting room. He had frequently been the confidant of both Robin and Annabelle, but he had not been privy to any of the discussions they had between themselves. Seeing the way they communicated, the adoring gazes between them, the gentle caressing, the close physical contact and the emotion in their words was something he had not witnessed like that.

Chris felt foolish upon realizing that yet again, his heart had sunk at witnessing how different the relationship was between the two of them. Annabelle had written a letter to him on the day of her wedding that had made the difference very clear to him. After seeing Chris drunk and hearing his aggressive words towards her, Annabelle had left the marquee and come up these very stairs into their bedroom.

She had written to Chris that he was her best friend, and that she loved him as her brother. But she had made it clear that her love for Robin was different. She had written to Chris that before she had even met him, she was already embroiled in what felt like an epic romance with Robin and she was determined to be loyal to him and to give her everything to building a life with him. That letter had ended with an appeal to Chris that marrying her lover, should not mean losing her best friend.

Chris still had that letter. He had wanted to honour it. Annabelle’s reaction to Chris being abusive to her was to call him her best friend, her brother. But that was all that there would ever be. From the start, Annabelle had been careful not to give Chris any hope of a romance developing. It was good for Chris to witness how tender and loving Robin and Annabelle were with each other. It reaffirmed in his mind that there were clear lines in their relationship.

Chris knew there was no spark between Harriette and him. But after the phone-call with Gina and having such a visual reminder of the fact that Annabelle’s heart was well and truly someone else’s, Chris felt a rush of enlightenment that it really was up to him to let go of any hopes he had of his relationship with Annabelle ever becoming more than the close friendship they had enjoyed.

Chris walked down the stairs and headed towards the sitting room. He could see Robin and Annabelle sitting close together on a sofa. He saw Stephen Grainger standing next to the piano while Fiona who was sat down was searching through a music book. Chris nodded as he made eye contact with Nick, who was sitting in an armchair. On the other sofa was Nick’s wife Anna who had a huge smile.

Next to Anna was someone Chris had never seen before. That was the first time he laid eyes on her. In fact, Chris found his eyes fixed on the pretty Natalia who was looking up towards the piano.