Four days down, and only one to go! Then I travel to mi familia! Happy happy days! 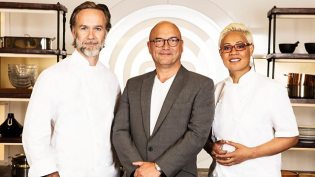 Tonight it is the last episode of Masterchef: The Professionals – FINALS WEEK!!! I have loved watching this series. I missed some of the earlier episodes, but I have caught all of FINALS WEEK. I just loved it!

I am not a great cook. But amazingly, some people actually pay me money to cook for them. So far, nobody has died because of my cooking, which I find encouraging. But the young chefs in this series are so impressive. It makes cooking seem very exciting. The last two days I did ten hour shifts. Tomorrow should be easier I think. Oh, I do hope so!

He and I have been having fun, but from time to time we have had a serious discussion about the past. Some of what we have discussed has been easy-ish. I have asked him questions, he has asked me for questions. Hearing each other’s explanations has been helpful. We have both found the replies we have received made sense of things and we were satisfied,

However, there are some things, which neither of us have a real explanation for. We just had both at times lost control of our feelings, and spoke out of turn, and behaved badly. Both of us did that. It was a pressure cooker back then. It was very intense. We both made mistakes.

We have both expressed sorrow and regret over what we bear responsibility for. It’s been up to us to decide whether we could let the past go, whether we could forgive. Ignore the mention of marriage in the quote below (we are not rushing into that quite yet):

Goldfinch said to me a while ago that he was scratching his head wondering at my powers of forgiveness. But Jack has a lot to forgive me for too. We hurt each other back then. But I think we have both agreed that the reason why we lost control and said and did hurtful things, was that we had strong feelings for each other, which we couldn’t act on at the time because of the huge invasion of privacy that surrounded us.

I am more than ready to let the past go. Why would I want it to dominate and dictate my future? All I want to do is draw closer and closer to Jack, to let trust and love flourish. I can only hope he feels exactly the same way about me.