I have just a few weeks to prepare myself. After Christmas, we will go public. Until now we have been in hiding. It’s all been very “cloak-and-dagger”. He tells me where to wait for him. his car pulls over, I get in and then we are off.

We’ve walked on the beach late at night. That was the first time it got really romantic. But it was freezing. But he wouldn’t let go of me. We’ve walked in the woods in the dark. He has been recognised a few times. He says he is less in the limelight these days. But I saw him on television twice last month alone. He continues to balance the media with work he does for various charities. And he does it so well.

It’s just been he and I. Mostly in places he has hired. He will send me in to get the keys to our cottage or lodge because he is the one who will be recognised. Nobody would know Caramel on her own. He thought it was hilarious to leave a review on Trip Advisor about the a place we stayed in. I wish it could just be he and I alone forever. But it can’t. You can’t hide from those you love most. I am desperate to tell people I love. But as we both know, when you start to tell those you are close to, it does not take long for news to spread.

I am terrified that I am not going to be able to face the pressure that I know will come. I have been in a bubble of love with him. All these weeks of actually being glad that the nights were getting longer. Darkness has made it so much easier to hide.

He wants to tell his parents and his sister when he is with them  during the holidays. He wants me to tell any family that I need to. My parents, my younger sisters. They need to be prepared. We both know what happens. He will of course be the focal point of everyone’s interest. I will just be that blonde on his arm.

I hate seeing myself in photographs you know. And they take them from such hideous angles. it is so invasive. It’s enough to give me a complex. But I have to do it for him. It’s his life you see. And he does it so well. He wants me by his side. He’s already mentioned a couple of events in the new year he wants me at. By his side.

The last couple of months have just been incredible. I have felt loved. That’s what we needed. We needed to be alone to work everything out. There wasn’t really that much to work out in the end. Just a lot of love. That’s all it needed. A chance to be together and let love do the rest. And he does it so so well. I did wonder at times as if there was a reason he held back. Well, now I know that if there was a reason, it was not any physical inadequacies. No shortage of love. Perhaps it is a good thing that we are getting our fill of the erotic variety before we face the opinions of others. I am hoping that’s all we will need to survive what everyone else thinks. I am going to try to block out everyone else’s comments. 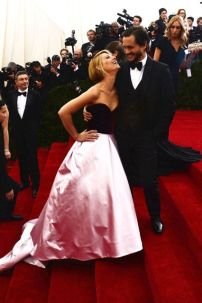 It’s hard to believe still. over four years, believing he hated me. But he wants me by his side. I am terrified that I will let him down. If you notice photographs of a well know figure, handsome with greying hair, who is stepping out with a caramel haired woman on his arm – please know her heart is racing. She is terrified in every way. A miracle has happened and turned her life upside down.

She is not just a ditzy blonde wannabe. The two of them actually lived in the same flat for some time. They know each other well. They have been breaching a rift. They don’t want to let each other down again. The blonde on his arm is a woman who always said he was the love of her life, despite everything that happened. You might see her real name mentioned. But to you, she will always be Caramel. She has no idea if she is going to be able to continue writing her story. It’s taken a surprising twist these past few months which she never dreamed would take place.

What if it all goes wrong? At least now he and I have something wonderful to remember each other by.