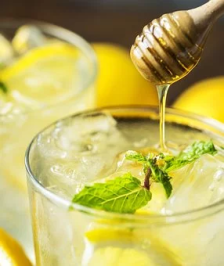 I have been through two whole jars of honey in a week, besides a lot of lemons. Being poorly sick has totally changed my tastes. I have been breathing in eucalyptus on tissues,  my scarf, and my pillow cases. I have had Olbas Oil baths and been rubbing Vicks Vaporub all over me. Which Jack should be here for.

I just feel as if the inside of my chest is coated in so much yuck…and no matter how much coughing I have done, it is still there, and still making me feel exhausted.

The strange emotional tiredness is lingering too. I walked past a tube station where I remember meeting Goldfinch on one of his visits to London. As I was walking past the entrance, the memory was so vivid that I could see him walking towards me. I wanted him so much! I had to bury my face into my scarf while my tears took over.

I was looking for something slightly different to drink, but still with a cleansing flavour – if you know what I mean. I picked up some ginger and lemongrass cordial and have been sipping it mixed with steaming hot water.

It’s a welcome change. And to be honest, I feel I need to cut down on my honey intake.

At least there were no builders playing music into my bedroom window at seven o’clock this morning. Realizing I was not going to be very good company I cancelled going to the cinema with a friend tonight.

But I am going to have another Olbas Oil bath, smother myself with Vicks Vaporub, put on my snuggly pyjamas, watch Masterchef…and then snuggle up in bed. I am doing everything I can…hopefully this lurgy will clear up before my weekend with Jack.

Plenty of fluids and sleep – lots of sleep – I need to get better at getting better.

I my have mentioned once or twice that my eyebrows are a bit feeble, and that I don’t know what to do with them. I was a bit overzealous with plucking them at one stage, so for the past few months I have been letting them grow and do their own thing. But even though they are fairly feeble, I need to do something to keep them tidy.

Friends have recommended eyebrow products and treatments, and they have also told me to go and see a makeup artist/consultant. I have had a fear of going to see a makeup consultant because I have seen what they have sometimes done to themselves and my friends. and it frightens me. I don’t want to look like a clown, or a pantomime dame. Hmm.

Anyway, on a spur of the moment impulse, I went into a department store recently. I had an hour or so free and thought to myself, “just go in and see if there is anyone who looks normal”. Well, I had a glance around and I saw lots of scary eyebrows and heavy eyeliner everywhere I looked.

There were so many weird looking makeup consultants there. One looked like Cleopatra. There was one whose expression looked as if she had received a huge surprise – her eyebrows were so high and arched. There was a consultant with a very particular shade of hair, unlike any colour I have seen hair before, and matching lipstick and very scary eyebrows. There was a tall slim woman with great slashes of eye-liner almost reaching her ears. The rest looked like the women in that Robert Palmer song…I was frightened! I almost walked out!

But then I saw her! There was a makeup advisor who looked…well, she looked “normal”. She had the natural look. She was wearing makeup, bronzer, some eye-shadow and mascara and lip-gloss. But it looked so good and not at all intimidating. She looked healthy and appealing. So I made a beeline for her.

I explained my predicament. Incidentally, she never wears eyeliner, which was of great comfort to me. She listened and laughed, and she sat me down and gave me a training lesson on how to look after my eyebrows, followed by a full make-over. I really liked what she did. She gave me a natural look. The products she used were great, they lasted all day. But I made it clear from the start, I was only interested in one. (Friends give me make-up all the time and it sits in a drawer neglected.) I wanted the Hourglass Arch Eyebrow Micro Sculpture Pencil in Platinum Blonde.

That is the first time I have spent any money of my own in three years on makeup! Around nine months ago, I used a SpakeNK gift card someone gave me last Christmas to buy a tinted moisturizer which I am still using. The consultant was right, a little goes a long way! Chantecaille Just Skin Anti-Smog Tinted Moisturizer in Bliss. 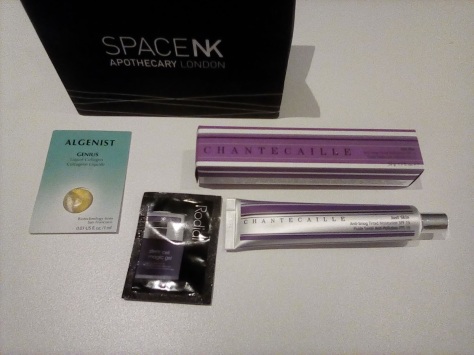 And that my dears…is pretty much all I am bothering with most of the time. A bit of sparkly eye-shadow and some mascara for nights out along with a smear of lip-gloss, or occasionally red lipstick. Mostly, the au naturale look.

I do love this video. Here’s to looking real, and not like a pantomime character. With just a little bit of help from a product or two…I am going to be myself!