An expression I grew to strongly dislike after I left London three and a half years ago because of the injuries I received was “it’s the end of a chapter of your life, you need to turn over a new page and enjoy a new chapter”.

It was the last thing I wanted to hear. I know people were probably well motivated. But I totally rebelled against that idea and made it my mission to return to London – because I wanted my life back. I was not ready to give up. I did not want to start a new chapter.

I still feel as if my life is just on pause, until I am back where I belong. However, this post is not about the effects of the crime I was victim to. I am rather thinking about Goldfinch yet again. 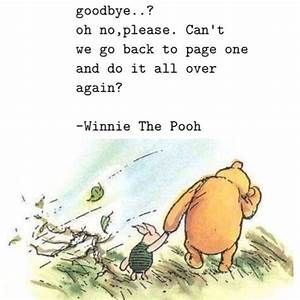 Goldfinch is leaving. That is the right step for him. I would like longer with him. But I have had longer with him. When I first met him, he thought he would be leaving England in the spring. So rather than five months, I will have had over thirteen months with Goldfinch. I am very grateful for that.

Goodbye has to come at some stage. It may as well be now. But I share these sentiments in the Piglet and Winnie the Pooh picture I have attached….

“Can’t we go back to page one and do it all over again?”

13 thoughts on “Can’t We Go Back To Page One And Do It All Over Again?”