Do You Think He Is Coming Back?

Annabelle had rung the doorbell at the home of Ralph Crabbe a couple of times already. She could detect a rich meaty scent wafting from the kitchen that made her stomach juices start flowing with anticipation. Perhaps Ralph was in the middle of something that prevented him from hurrying to the front door. She tried the handle but it was locked. She waited for another minute before ringing the doorbell again. When there was still no sign of Ralph she decided to talk around to the back of the house. She passed two windows and could see the lights were turned on. Ralph never left the house without checking lights were turned off and windows were shut.

As she entered the garden she could see that the sliding glass doors that led out onto the patio were slightly open. Stepping into the living room, she called out Ralph’s name. She called a couple more times before turning towards the kitchen. The oven was on and there was a pan of vegetables on the stove. The stove was not on though. There was no sign of Ralph. She turned back out into the hallway and headed towards the front door and the stairwell, perhaps Ralph was upstairs. It was then that she noticed an arm sticking out from behind stairs. Annabelle grabbed her phone and dialled 911.

While she was sitting in the waiting room at the hospital, Annabelle was greeted by a familiar face.

“Well, if it isn’t Annie Riley, how are you doing Little Miss Mysterious?”

“Oh hey Jenna. I’m fine. Just waiting for some news on Ralph Crabbe. he had a fall tonight.” 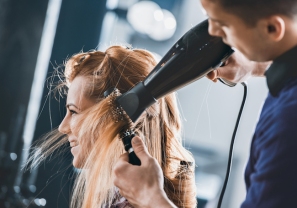 “Oh dear, poor Ralph. I am sorry sweetie. I know he’s one of your best pals. Now don’t keep me in suspense. You were the talk of the salon today. What is going on with you and that hottie Chris Ward?”

“What do you mean? We are just friends.”

“It’s all I heard at the salon today, you two were making out in the street outside O’Flanagans. When did this happen?”

Annabelle became rigid and in an almost hostile tone she demanded, “Who told you that? Whoever it is they are wrong.”

“Oh don’t be embarrassed sweetie. I am rooting for you, He is a real nice guy. Great kisser. He’s been sweet on you for almost a year. You’ll be the sweethearts of Blackwood, Everyone loves a romance.”

“Jenna, we were not making out. That’s a lie. And there is no romance, at all. Please tell whoever told you that they are very much mistaken.”

“Whatever you say Annie But you don’t need to be coy about it, Margo and Amber saw you two kissing and said you looked so sweet together.”

“Margo and Amber. I’ll speak to them myself Jenna. We weren’t kissing. They’ve got the wrong idea.”

Margo and Amber were fleshly sisters. They were the main source of gossip that was spread via the Blackwood Zumba group all over the town. When she had first started living with Ralph and Barbara Crabbe, Annabelle remembered the two women inviting her out for coffee to get to know her and asking an array of personal questions which Annabelle could not possibly answer. Eventually, they had lost interest in her as not being interesting enough for them to keep making effort with her.

Annabelle felt mortified at what Jenna had told her. If people who lived in Blackwood heard this they would assume there was something going on with her and Chris. She was expecting Robin to arrive in Blackwood in a couple of weeks. What if somebody said something to Robin about Chris kissing her. Well, she would tell Robin the truth But still, it wouldn’t make it any easier for Robin if people were staring at them, now that Annabelle seemed to have become a subject for gossip in Blackwood.

For the first time since the night he had tried to kiss her, Annabelle felt annoyed with Chris. She had not thought about him until now. She had noticed his calls and messages, but she was so consumed with planning for Robin’s visit, she had procrastinated replying.

When she could finally go in and see Ralph, he was delighted to see her. For an hour Annabelle was able to forget her worries and concentrate on cheering Ralph up. Her hopes of asking Ralph if he could host Robin had of course faded. She contented herself that it would be fine to ask a neighbour instead, as Burt and Pearl had suggested. Poor Ralph. His hip was fractured. He would have quite a stay in hospital. There was talk of possible surgery, and physiotherapy to follow before he could even think of returning home.

Burt Jennings appeared on the ward and spent some time chatting to Ralph, before the nurses indicated that visiting time was now over. Annabelle and Burt promised to return the following day with a few items he would like to have with him.

As Burt drove home, he noticed Annabelle was very quiet. “You must have had quite a shock finding Ralph like that. Thank goodness you had gone over there.”

Annabelle nodded but remained silent. Just a few minutes from the Jennings home, Annabelle who had been deep in thought, told Burt that she was concerned that she had been spending too much time with Chris Ward and that some may have jumped to wrong conclusions about their friendship.

Burt stared at the road, wondering whether to mention that Chris had been over again that afternoon hoping to speak to Annie. He advised Annabelle not to be too worried about what people thought, but asked if there was any reason she felt uncomfortable with Chris.

Annabelle seemed reluctant to answer, but she said to Burt, “Chris has been very helpful Burt. He really seems to understand depression. He has been good for me. But I really do think that from now on we should not spend so much time together. Especially with Robin coming. I don’t want Robin to overhear anyone mentioning something that isn’t true about Chris and me.”

Burt nodded and wondered what else Annabelle might not be telling him. “I’ll have a word with Pearl, shall I? I know she thinks highly of him. Perhaps she ought not to be inviting him to join us for dinner so often.”

“Burt I feel bad. I don’t want you and Pearl to change the way you are with Chris. But I think I will have to avoid him from now on. At least until Robin comes. I don’t want to create an awkwardness, but I think it’s best if Chris and I, well, if we keep a distance from each other, for a while.”

“Annabelle, you a grown woman. I am not one to pry. But I can’t say the same for Pearl, so it might be best if you and she had a talk about this some time. You seem tired now. But speak to Pearl tomorrow and make sure she understands what to do if he comes asking for you, like he has been doing for the past five or six weeks.”

Robin opened his eyes and glanced at the time on his alarm clock, 3:08am. He had not slept a wink that night. How was Annabelle going to react was the subject of his thoughts?

He had not seen her for twenty months. But before that there had been just over two years of challenges. He had never thought it was her fault. The head injuries she had received in the traffic accident. They seemed to be behind the terrible mood swings. Her feeling overwhelmed by becoming a mother. Their daughter Lucy crying throughout the night, disturbing Annabelle’s sleep so often. She suffered when she didn’t sleep enough. The loss of Lucy – no wonder Annabelle had felt anguish and despair.

Robin had wanted to find the right words to comfort her, but he struggled. Annabelle had refused to eat. And then there was the bruises, scratches, and deep nail marks he found on her. The numerous times she had left the house in the middle of the night to go for a walk around the streets of Chelsea. Worry for Annabelle had consumed him. Over two years of stress and then grief. She felt everything so deeply. Never far away from tears and emotional outpourings. Robin had been completely exhausted, “burn-out” was what a Doctor had said to him. He had lost all taste for life. It was not that he had lost his love for Annabelle. He just couldn’t feel anything, he was entirely numb, completely withdrawn.

These past few months he had finally started to feel positive and well again. Claudia had kept a close eye on him and pushed him even when he had no motivation. He had energy, he was working, he enjoyed his relaxation time. He was reading and swimming. There was so much that interested him now and he enjoyed talking about his interests and getting to know colleagues and neighbours.

But now the thought of how Annabelle was going to react when he told her what he had been hiding all this time weighed on his mind. Was he ready to see her distraught again? Could he deal with her being upset? Robin glanced back at the clock 3:56am