I found another e-mail to Stuart that I sent during my first job back in London, which was pretty funny to read through and remember. My boss seemed to enjoy my teasing and told all of his friends I was putting his name forward to the Queen for a knighthood.

My boss really likes birds, and I mean the feathered variety in this instance. He has a couple of bird-feeders in the garden right outside the huge glass doors that make up the entire back wall of this property. He likes to sit on the sofa sipping his coffee and watching little birds fluttering up to the the feeder and feasting on the peanuts or seeds. It’s quite nice to see him enjoying the calm and peace.

However, there is something that really vexes him. It completely disturbs his peace of mind and provokes him to jump up in outrage! 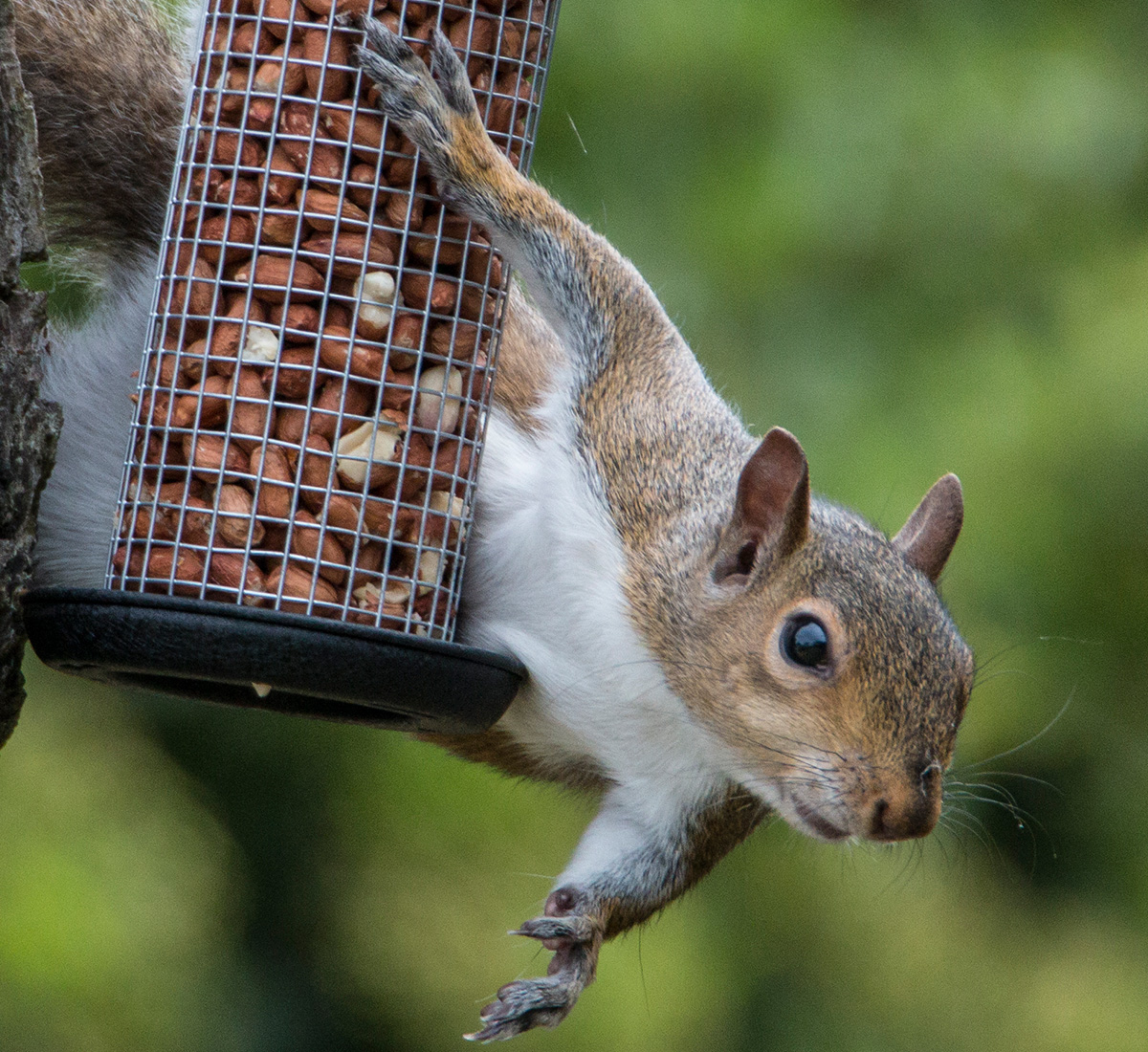 Now, my boss has told me that he has had to abandon his former way of dealing with the squirrels – his daughter told him that the neighbours would report him to the police if he carried on using his air-rifle all times of day. 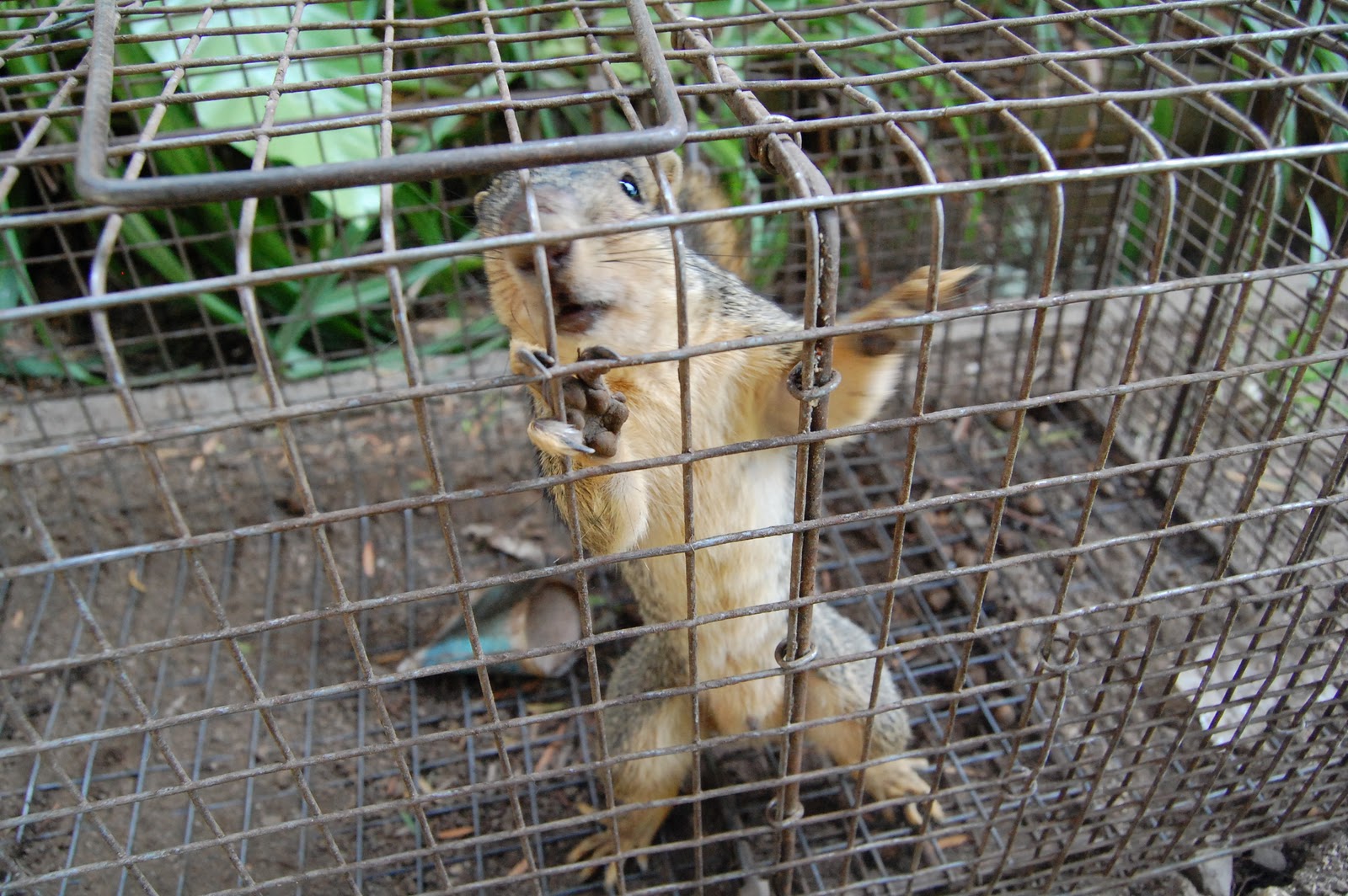 So instead he has bought a humane squirrel trap. The idea is that a squirrel is tempted inside by the pile of food and then down comes the door, caging the squirrel, but not harming it. I found myself laughing at my boss when I realized that rather than put the peanuts he feeds the birds in the trap, he opens a packet of the luxury Marks & Spencers fruit and nut mix and puts that in as the bait to tempt the squirrels.

I was teasing him earlier about his humane squirrel trap. During, the past week he has trapped 17 squirrels and driven them off into the countryside to release them into the forest. He parks his car, takes the cage into the woods and let’s the squirrel out to scamper off into the trees. The humane trap only catches one squirrel at a time so he is clocking up quite a lot of mileage on relocating squirrels!

I told him he is likely to be nominated for a knighthood (he already has some other kind of medal/award the Queen gave to him) for his “Squirrel Relocation and Reintegration Program”. I told him I was convinced her Majesty would be delighted to hear the details of his devotion to the English squirrel population, and his efforts to improve their living standards, transplanting them from suburban gardens to the heart of the English countryside.

How wonderful it is to think of the squirrels coaxed by a pile of “M&S” luxury fruit and nut mix, then in the safety of a well ventilated and protected carrying unit, transported in a gleaming Mercedes to a beautiful part of the forest. Do the squirrels realize they are travelling first class? Then arriving at their stunning new home in protected woodland where they can be with all their squirrel siblings and cousins. They can enjoy the fruits of the forest, rather than just the bird seed and peanuts my boss puts out for the local chaffinch and tit populace.

I told him he is the model animal welfare advocate for the borough, and we can forgive and forget all about what he used to do to the squirrels before. Then I looked out of the window at the squirrel that was perched on the bird-feeder, and said to my boss, “I recognize the yellow stripe on that squirrel. I think that may be the same squirrel you relocated this morning?”

14 thoughts on “The Squirrel Relocation And Reintegration Programme”