Here is a little episode within the first couple of admin jobs that I held when I was 18 – 24ish. This was when I was probably at my prettiest and slimmest (except from the two great lumps on my chest) and was aware of receiving very friendly attention from men of all ages (which was new to me…at high school I was only aware of boys my own age and the odd scary teacher looking at me in “that way”.)  This was a confusing time. Men who I looked at and thought of as “dad” figures before were now “checking me out” and I was aware of it and embarrassed. Leaving school and college and being out in the adult world posed challenges that all that homework and all those exams had not prepared me for. I seemed to be regularly stumbling into my own gullibility and naivety. I often found myself blushing with deep embarrassment. I was working in a very large open plan office. For some reason the printer that was assigned for the use of our section of the department was positioned right in front of the desk of one of the “big cheeses”. I was so scared of him. Looking back, I realize there was nothing scary about him. It’s just that he was the boss and I was easily scared. However, whenever I had to print a document, I would rush over, grab my print-outs and flee back to my desk, hoping I had not been noticed.

One day…I needed to print a large number of documents. I walked over to the printer but it was still slowly churning out pages. I kept my eyes fixed to the printer because I was scared to look up at the boss. Then I heard him say “hello!” I glanced at him and realized he was looking right at me with a broad smile. Confused and uncomfortable to have been noticed, I smiled back and said “hi” in as composed manner as I could muster. He almost whispered something…I did not catch every word, but I did hear him say “pleasant surprise” which I didn’t understand at all at the time. I tried to keep my eyes rested on the printer but occasionally I cast a brief glance towards him. It seemed to me that he had decided to stop his work and continue looking straight at me. He maintained a very warm smile and intent gaze at me. I started to feel so nervous. I tried to calm myself and decided it would be appropriate to try to return a warm smile. I felt relieved when I could scoop up all of my print-outs and scurry off. Not before he had said to me in a quiet voice “thanks for that” and I had replied “no problem”.

As I returned to my desk I passed two men walking quickly. One gave me a wink and a smile, the other said “hello lady!” I smiled, but already tired of all this friendliness within a few short minutes, I was so glad to sit down at my desk.  I felt a bit shaky about realizing my existence had been noticed.  Better to be invisible and unmemorable by far. 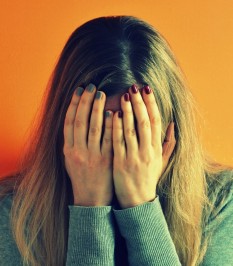 Within the next half an hour I paid a visit to “the ladies” which was not very far from my desk (newbies always seem to be stuck in the worst parts of the office like next to the toilets). It was only then that I caught sight of myself in the mirror. So…the top button of my blouse and also the lowest button were fastened. The rest of my blouse was gaping wide open revealing my cleavage in full glory. On seeing myself I was embarrassed naturally and hastened to fasten the rest of the buttons and then it came…”aaagh!!!!”…the memory of what had happened when I had been at the printer. I am not going to describe my agonies. I didn’t want to go back to my desk, I was ready to just run from the building and never go back to work again.

Of course, I recovered. I never had the courage to go and apologize to the boss though.  I was more nervous than ever of going over to the printer. I did notice though that after that day, he never uttered a stern voice to me, he was always very warm and friendly.  Never inappropriate, just polite and kindly.  I did not ever worry myself about his actions on that day, I just kept those thought in a sealed mental box with my own shame and embarrassment.

Lessons learned: buttons are not my friends, safer to choose tops without buttons. Embarrassing situations / mistakes happen and you can recover.

10 thoughts on “Buttons Are Not My Friends”