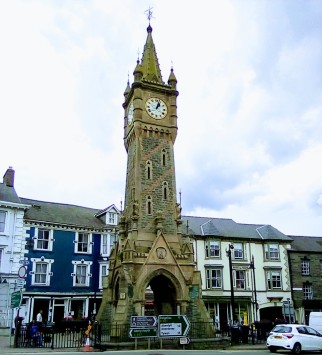 My brother-in-law has many many family members in North Wales, mainly concentrated in the southern part of Snowdonia.  My time here has been spent traversing Welshpool, Bala, Abergernolwyn, Dolgellau, Tywyn, Aberystwyth and earlier this week we popped into Machynlleth on Market Day.

It has been a long time since I potted around a market.  There are traditional market towns up and down the country.  I love to wander around and have a nosey.  I rarely need anything and usually end up buying something like a jar of honey or marmalade.

I bought Vegan Blue Cheese and Seitan this week.  Jury is still out on both of them I am afraid.  But I love how super-friendly everyone was.  My niece receives so much attention everywhere we go.  She is super gorgeous so I can understand.

We also had a little look at some of the landmarks and points of interest in Machynlleth.

Have you ever heard of Owain Glyndŵr?

He was a Welsh ruler and the last native Welshman to hold the title Prince of Wales. Apparently many regarded him as an unofficial king. He instigated a determined but unsuccessful revolt against the English rule of Wales.  He fought fiercely and was a warrior through and through.  We are talking about 1400-1415, so Machynlleth has some pretty ancient landmarks. 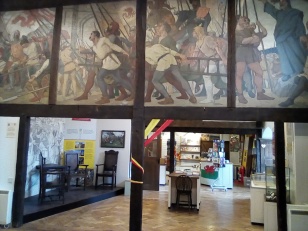 Owain Glyndŵr called his first Parliament of all Wales at Machynlleth.  The photograph above is is the location where he was crowned Prince of Wales. He launched his national programme for an independent Wales. He envisioned an independent Welsh state with it’s own parliament and a separate Welsh church. He wanted two national universities (one in the south and one in the north).

Despite all of his efforts, it would be hundreds of years later when Owain Glyndŵr’s vision would be achieved.  Yet, he is held as quite the  hero. 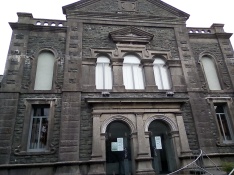 We also visited a building which used to be a tabernacle and has turned into a concert hall and exhibition center.  MoMA (The Museum of Modern Art) I was asked by the lady at the welcome desk  if I paint – unfortunately she did not mean with emulsion or gloss paint (which I can), she was referring to water-colour or oil-paints (which I can’t).  She invited me to submit an entry to the annual art competition (which I won’t be doing) but hey, I will throw out her invitation to any budding artists who are casting their eyes over this post.

I have even discovered that they have a blog, one that is clearly superior to mine:  https://stories.moma.org/

Next stop was the vegetarian cafe The Quarry.  I had seen the reviews and most of them gave high praise to the Big Mach (the veggie burger) and the trifle – I cannot remember the last time I had trifle.  But I had no idea how much we would enjoy our lunch there.  Huge thumbs up for The Quarry – vegan/vegetarian cafe. 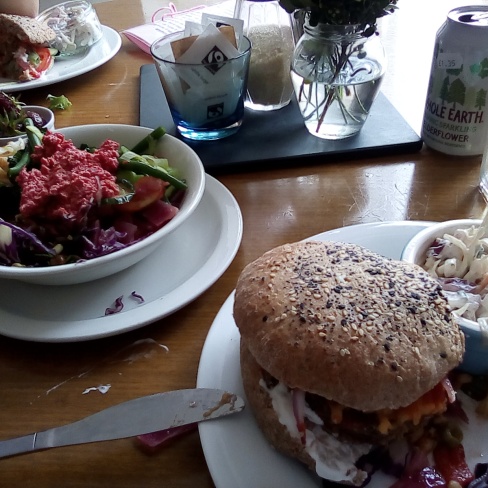 I love the small-town feel to this area.  Everyone seems to know everyone.  No less than forteen people called over to Milly as we wandered along.  Some were related to Milly’s husband, some were customers and some friends or neighbours.  We even bumped into one of my Dad’s friends from our home town near Liverpool.  He and his wife love this area for holidays.   All had headed to Machynlleth for Market Day.

As we walked back to the car greeting more friendly folk who wanted to make a fuss of my gorgeous niece, I felt very content with our stress-free and rather delightful day out in Machynlleth.

Back at my sister’s sweet abode, I am settling down for my last sleep here before departing from Wales.  As  for when I will be back in London…well, it all depends on whether Djokovic beats Nadal tomorrow.  I will explain in another post.

Tomorrow, we are headed to Staffordshire.

3 thoughts on “Milly and Me Try Market Day In Machynlleth”