I slept all the way through my first day of holiday.  I was so wonderfully organized with my packing and left my little abode in plenty of time to catch my train up north, but as soon as I sat down on the train (which had no buffet car – which is what you would expect when you buy a rail ticket to take you over 200 miles for £6) I realized I had left my water bottle in the fridge.

The hottest weather we have known in England since before I was born (apparently 1976 was the last time England had a heat wave like this), and I had no water.  So when I reached my destination five hours since my last drop of water, and had lunch with my parents, I was suffering!  I tried to re-hydrate myself slowly, but I was already wilted.  I had to lay down on the bed in the cool guest room.  I slept for several hours.  Then we headed to my sister’s home where I stayed the night.  I was so tired.  I slipped into bed at around 8pm and slept for thirteen hours.  I think it may have something to do with the crazy ache in my head also.  But I feel better after going to hospital on Thursday and being reassured that there is nothing to be concerned about, just “unusual swellings”, which seem to be not so unusual in my case because the last four CT scans have shown the same thing.

My second day of holiday, I wanted to sort out my things before I went out.  So I ironed all the clothes that were looking rather crumpled after being squished inside of my suitcase.  I love ironing.  Love it!

Now I was ready to start relaxing and enjoying myself.  We have spent today catching up with friends in the town I grew up in.  I am going to prepare another post about this town as I borrowed a tablet so that I could take photographs at the same time as I gad about to see friends and places I have grown up with.

During the course of today, I also managed to squeeze in a hair appointment.  I was hoping to have my hair trimmed at some point this week.  The cost of my cut and blow-dry today was exactly half the price of any of the salons in the pocket of London I live in.

I went to a salon that has been around for decades.  I remember my mum was a faithful customer when she lived in this town.  My mum had a few, let’s say “experimental” hairstyles that did not really suit her – the orange curly haired mum particularly stands out in my mind.  But on the whole, the team of stylists did a great job with my mum’s hair.

My memories are vivid of the day when Mum brought me down to this salon to have my ears pierced.  I had been asking for years and finally my parents decided I was old enough to have my wish granted.

I have another very vivid memory of one of the biggest temper tantrums my sister Mandy ever threw.  Mum had asked the hair-dresser to trim Mandy’s curly hair.  Milly and I had straight hair which was easy for Mum to cut herself.  But Mandy’s curly hair was not as easy to tame.  (My Dad had cut it once – maybe I should save that story for another post – it was so funny.)  Mandy threatened the hair-dresser that if she cut off more than half an inch she would “kill her”.  Yes – I know!  But these were the words my troublesome little sister came out with at times.

Well, it was an agony to watch what happened when Mandy felt that too much hair had disappeared.  She started screaming and smacked the hair-dresser.  Then she ran, she bolted out of the salon and we all ran after her all the way to the town library several minutes away.

Mandy stood there in tears, half of her hair had been trimmed before she had fled from

the salon.  The only way to calm her down and convince her to return to the salon to have the rest cut was to give in to Mandy’s demands.

I always thought it unfair that Mandy could throw these huge tantrums and the only way she would behave was when she received something she was adamant she wanted.  I was appalled by her behaviour as a small child to be honest.  I am very very glad she grew out of that and my parents found a way to tame her fiery spirit.  She was five years old on this occasion, but she knew what she wanted: 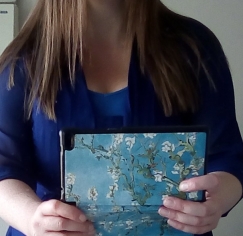 Sitting in the salon today brought back lots of memories!

The young lady who washed my hair told me she had never visited London.  She would love to go and see a musical like “Phantom Of The Opera”.  I was pleased with the stylist who cut my hair as well.  I think she did a great job.  The photo at the top of this post was the BEFORE picture (you can see how terribly dried out my split ends are), and here is the AFTER picture I took when I was back at my sister’s house.

Lovely feeling leaving a salon with that swooosh swooosh feeling of neat, tat-free and slightly too glamorous for a blisteringly hot day – hair.  No tantrums from me.  No, the penny-pinching side of me is delighted to have had my hair trimmed for half the price I have to pay when I go to a salon in London.