I guess this post is rather self-explanatory if you have looked at the title.  I think I need to shorten my titles.  They seem to be growing longer and longer.

I did not have a television for over ten years after I left home.  So I am rather out of touch with current actors and presenters.  I have one here in my current accommodation. Everyone is a new face to me….except the face you see above.

It was a nice surprise… but definitely a surprise to see Leon on the screen this morning on the BBC Breakfast Show as I was eating my Weetabix and drying my hair.  I went to high school with Leon.  We were in different forms but we were in the same classes for a lot of subjects.  Definitely English, probably Maths and Science too.  It is an awful long time ago!

I am pretty certain that when we went to High School Leon was already playing for the junior or youth team for one of the major football teams in the region.  (Everton I believe.)  I think he also played for the junior England team as a teenager.  I seem to remember a school trip to watch him represent England.

After that….well, after school I was busy.  I did not really follow football, but my Dad has definitely mentioned over the years that Leon was playing professionally.  I asked Google earlier and I found an outline of Leon’s football career.  He has been busy.

Now it seems he is involved with presenting shows in connection with football.  He was talking about the teams playing in the World Cup when I saw him today.

Seeing him brought back into my head a million memories of school.  I have not kept in touch with many school friends simply because life as a volunteer meant travelling so much.  I met thousands of people and made life-long friendships with some of those I worked with.  Well a handful of school friends I have kept in touch with and I went to their weddings and wrote to them for years.  But when I moved down south, regrettably, we have not kept in touch as often.  Sigh!

The years have flown by.  So much life… so many stories to share with you of people I have met… which has just reminded me.  I have to tell you about Lucy.  I will tell you soon.

But for now… this post is all about how strange it is to switch on the TV and see a school friend who you hung around with everyday for several years… staring back at you while you munch your Weetabix.  I could tell you lots of stories, but I won’t.  Leon might not like that.  That is the thing about publishing on-line.  You have to be so careful that anyone else you write about could not be remotely upset. 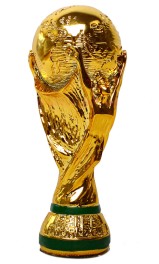 if I have ruined that for you.  No idea who they beat.  I have no idea what the score was.  Or the names of any of the men who played.  Oh dear.  Nope!  Definitely not remotely interested who wins the World Cup.  Fortunately for me, neither is Goldfinch.  (I am going to visit him this weekend.)

I love playing football… but I not intersted in watching professional footballers I am afraid.  Sorry football fans.  Still, it would be nice to see more of Leon on the TV… brings back so many memories.