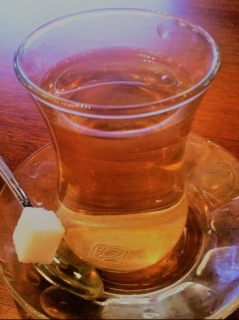 I have been gifted by a friend.  A friend whom I shared a rather memorable holiday with in Turkey a few years ago.  We fell in love with drinking this beverage when we were out there:  Turkish Apple Tea.

What a holiday it was.  I have been on two “package” holidays in my entire life.  Turkey was one of them.  Normally we just book flights and stay with friends.  But a friend wanted to try Turkey and she didn’t think we knew anyone out there, so she arranged for us to stay in an all-inclusive hotel.

The weather was gorgeous throughout.  Everything I saw of Turkey’s landscape was beautiful.  The food – yuuuuuuuummmmmmmmy!  However, there was a fly in the ointment.  We felt pretty much harassed by some of the waiters.  I was warned about this before we went, but it was quite frankly exhausting.  I do not like to be rude to anyone, but we had to be very firm, positively unfriendly night and day…and I found it all pretty disagreeable.

What salvaged the holiday was that we did in fact have friends out there.  A family we had grown up with were living in Turkey just a twenty minute drive away from our hotel. 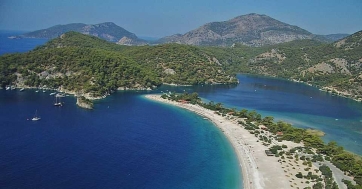 Our friends helped us to escape from the atmosphere within the hotel which was causing us so much stress.  They took us under their wing and they took us to many stunning locations.

I cannot remember the names of the locations we went to.  I know we visited a Gorge and walked up through the clear water. There was a hammock cafe at which we idled away an entire afternoon.  We were taken to some amazing locations to dine.  It was great to meet some of the friends of the family we had known since childhood.  We were spoilt rotten!  Plenty of invitations to dinner that meant we did not really utilize the “all-inclusive” hotel deal we had paid for.

Our Turkish speaking friends came to the hotel and spoke to the hotel manager and the waiters explaining in Turkish that we wanted to be friendly but if we were harassed we would go out of our way to avoid them.  We noticed a big difference after that.  They were polite but they were not inappropriate as they had been before.

One of the highlights of the holiday for me was scuba diving.  I had always wanted to…and it is something I would love to do again and again and again for the rest of my life.  My sisters and I are total water-babies.  I was transfixed by tiny colourful fish who were not at all shy of our presence.  They swam all around and in between us.  It felt as if they were greeting us with delicate little kisses.  It was one of the most special experiences I have enjoyed.

Aaaaah….sigh!  Paradise!  Everyone should be able to explore this beautiful planet.  What a home we have.  One day! 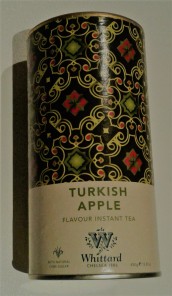 So when my friend came over to visit me, the gift she brought me was a tub of Whittard’s Turkish Apple Flavour Instant Tea.  I opened it and we had it chilled with ice-cubes.  Tonight I had some with steaming hot water.

One of the holiday experiences she reminded me of was the last night we were there, the evening we flew back to England.  She laughed reminding me of my karaoke antics and the reaction of the hotel staff and fellow holiday-makers.  I will write a post all about that bizarre night one day.

In the meantime, I am going to sip apple tea throughout the rest of the summer and remember that eventful holiday and our taste of paradise.