I will share with you my shameful tale of how I tried to do something relatively simple – send sweets to my sweet!  The tale of how this ended up being four times more expensive than originally planned and caused my Goldfinch both inconvenience and gave him something to laugh about.

I had been to visit him a week or so before.  It was the first time I saw the “man-cave” and met his house-mate.  He took me to an art class (I have to write a post about that day) and then we did some shopping before dining in an Iranian / Persian restaurant.  I had made him some naughty gooey chocolate brownies…which we had one or two of before the art class.

Well, when he dropped me at the railway station to catch a train back to London and I jumped on the 20,51 back to Euston…I realized I had the rest of the chocolate brownies with me.  Baking them had been my labour of love for him.  But I 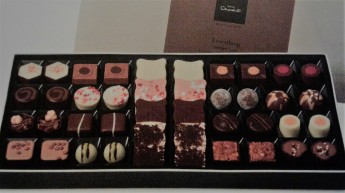 had them and they were on their way back to London.  I certainly could not eat them myself (ONCE ON THE LIPS…FOREVER ON THE HIPS!) so I guess I would have to take them when I met up with friends.

I came back from spending a day with Goldfinch full up on love.  My chocolate brownies had pleased him, and yet I had brought them home…typical!  So I decided I would send a foodie gift to him as a surprise to make up for it.  I would send my Sweet more sweets.  I tried to send a gift box on the Hotel Chocolate website.  However, I kept on having problems with the website.  I tried almost ten times to pay for the box of chocolates but for some reason my tablet kept on crashing.

I started looking at other options.  I was scrolling through websites with ideas for gifts when I came across these babies.  What are they?  Why, they are cake in a sweet little jar.  Hmm…I had never seen those before.  I chose the following….

I ask you…how could I possibly fail?  For some strange reason I thought I would have the cakes delivered to his work place.

There I was full of joy, skipping my way along with the happiness of giving, and the loveliness of the man who would be eating cake in a jar in front of all of his curious workmates.

Then it came…doubt, self-doubt.  Maybe he would think cake in a jar was odd.  Perhaps he would not like that I had sent it to his offices.

Hmm… what could I do now?  Then it came to me – a flash of brilliance – Goldfinch loves art.  When we were in the art class, he had a very old, bashed up paint set which he said was very cheap to begin with.  That gave me the wonderfu

l idea that I could buy him a nice paint set as a gift.  Some men like gifts to be practical.  All I had ever given to Goldfinch was edible treats.

So I asked Google about gift paint sets.

I know nothing…truly nothing about paints and art materials – that is our Mandy’s speciality.  I should have checked with her first…but instead I relied on the reviews and the discount and went for a Caran D’ache Gouache Studio Box Set of 15.  It looked good on the screen. Everyone had lovely things to say in their reviews.  I arranged for it to be delivered to his home address in gift wrapping.

Aaaaaah….laa-dee-daa!  Off I went again skipping with a joyful gait.  Happy me, happy him.

Then the doubt thing came back.  The self-doubt thing.  I suddenly thought “What-on-earth is gouache? This nagging doubt was so powerful it moved my feet in the direction of an art shop that was on my way home.

The art shop assistant seemed to be quite the expert.  She explained that if he likes water–colour then gouache is wrong.  I should not have bought gouache.  Sob sob!

She showed me water-colours.  She explained what pans were.  I had been wondering.  She recommended two particular water-colour makers. Windsor & Newton and she said even better Sennelier.

I went straight back home and I tried to cancel my Gouache order.  I asked Google about the water-colour brands she had told me about.  Now I found two water colour sets.  I liked both of them, however neither were available.  They were OUT OF STOCK.

Both websites gave me the option to “back-order”.  So I did….

A few days later…I was on my lunch break when I noticed Goldfinch had sent me a text message thanking me for the gift and saying he had just eaten the carrot cake one and it was delicious.  I was so pleased.  I asked him what the jars were like.  He replied “Jars?”

Doubts started to niggle at me.  I ignored it.  I just sent back a lovely “I love you” message.

Two days later, he texted me saying, “You didn’t try sending me a package to my work? I have a mysterious package in another office?”  Another office?  I confirmed to Goldfinch that I had.  He asked if it was a puppy in a basket with a limited oxygen supply.  I asked if he was not at work.  He explained that I had sent it to a site owned by the company he works for but on the other side of the city.  He was not going to have time to fetch it that day.  He said I had sent it to a large warehouse full of grafters.  Goldfinch is more of a pen-pusher.

The Hotel Chocolate order I thought had not been successful had gone through afterall. Goldfinch had received chocolates and then a couple of days later the cake in jars.  Only the cake in jars were sent to the wrong side of the city.

Then there were the art sets…again another bamboozled effort to be romantic.

Ugggh!  My order for the gouache set had not been cancelled…apparently, it had already been dispatched, so it was too late to cancel the order.  Then I found an e-mail saying that one of the water-colour sets had also been dispatched.  I immediately cancelled the other back-order.  Goldfinch ended up with two paint sets.  He almost ended up with three!

He wondered what I thought he had done that was special enough to receive four gifts within a few days.  I explained to him that my internet purchases had bamboozled me.

Aaaaaah Goldfinch….Sorry he realized I am barely proficient when it comes to the internet.  Although truth be told, if my purse strings allowed for it, I would be happy to shower him with gifts forever more.  Lovely lovely man.

5 thoughts on “One Of My Pathetic Attempts To Be Romantic”